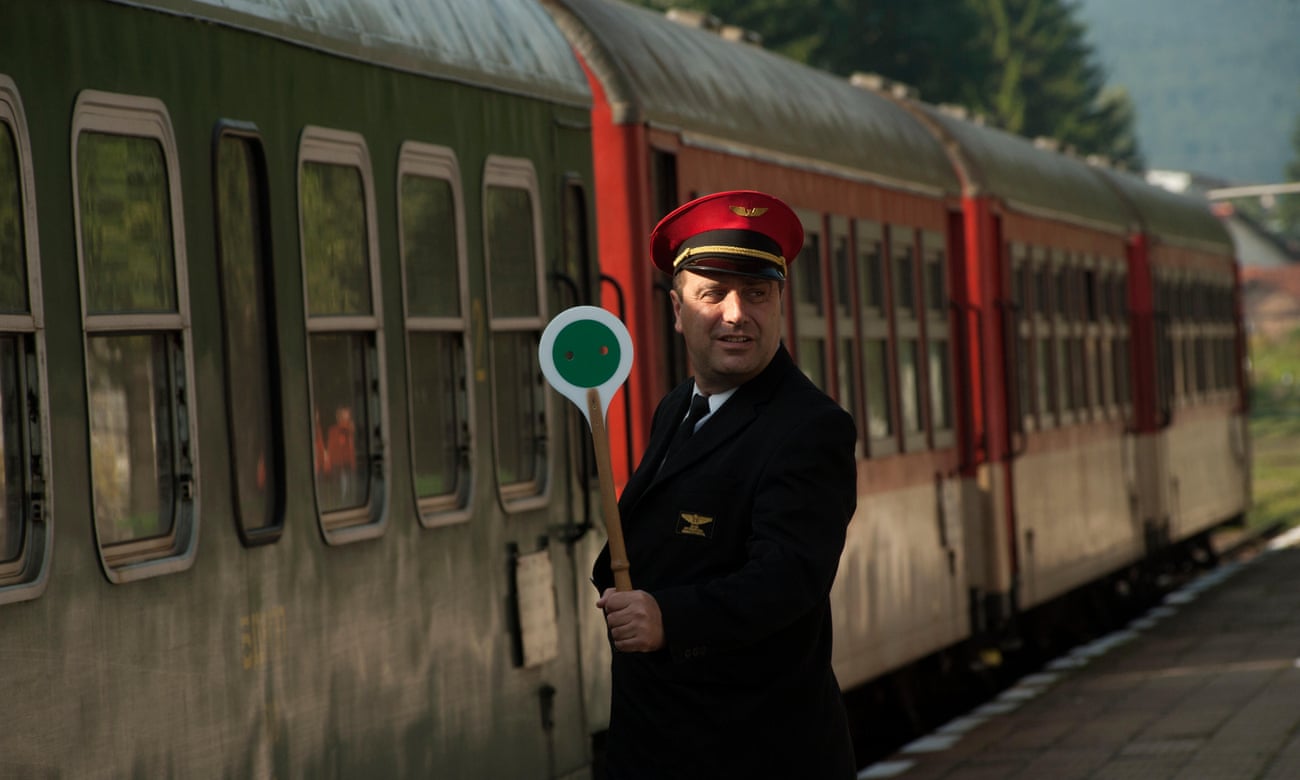 Time moves slow on the Septemvri-Dobrinishte railway in south-west Bulgaria (150km south of Sofia). Two weeks into a fairly austere trip in the Balkans, we found ourselves whisked away by the slow, narrow-gauge train that connects the Upper Thracian Plain with the Rhodopes, Rila and Pirin mountains, winding its way through narrow gorges and idyllic river valleys for five hours. The line features suited station-masters ushering families into the spartan carriage: it was a rare treat to stand in the open-air passages between them. We stopped for the night in the spas of Velingrad (2½ hours from Septemvri), imagining ourselves as extras in a Wes Anderson rip-off, before continuing on to Razlog.
• Tickets (€9) bought at stations, not available online, bdz.bg
Jack

Before your journey begins, linger a while at São Bento station, Porto. Here, 20,000 elaborately hand-painted tiles, or azulejos, line the walls, depicting scenes from Portuguese history. Leaving the station and urban landscape behind, you are soon at eye level with the mighty, green Douro River. The train curves its way through valleys of steep, terraced vineyards. Tiny platforms appear and disappear, but pretty Pinhão, a village of whitewash and terracotta, is a great spot to indulge in some of the local port wine fresh from the barrel. Just don’t miss the next train. It’s between 3-4 hours all the way to Pochinho.
• €12, virail.co.uk
Alex Lawrence

Almost immediately on leaving Split you climb into the Dinaric Alps to around 1,700 metres with views over the Dalmatian coast. After dropping down the other side of the mountains onto the valley floor below you head to Zagreb along the plains of Karlovac county. Crossing the border into Hungary you then reach Lake Balaton, the largest in central Europe and travel for 50 miles or so along its shore. And with Budapest almost in sight, the majesty of the Ottoman empire awaits. It’s a long journey (16-18 hours) so part of it may be in darkness. In summer there’s a sleeper leaving Split at 6.30pm and arriving in Budapest at 9.10am from €79. Buy tickets at Split station (no bookings online).
• seat61.com
Michael Dawson

For a step back in time, take a day trip from Roma Tiburtina to the medieval city of Viterbo. A two-hour journey costs around €5.50 and passes Lazio’s magical castles and blue lakes before you arrive in the walled city. There, as well as the papal palace within the city walls, take your bathing suit and head for Viterbo’s hot springs. Bullicame and Carletti springs are both free and a great way to see local life. Return to town for aperitivo before a two-plate pizza at Monastero. Then, back to Rome or find a small albergo for the night in Viterbo.
• trenitalia.it-inter.com
Daniel Hall

Greek rail travel is often overlooked but it’s a great way to explore the mainland. A new track, Athens to Thessaloniki (4½ hrs), makes for a fast and comfortable journey past mountainous scenery. Interconnecting suburban trains allow for excursions to seaside ports, ancient and mythical sites and ski resorts. I jumped off at Larissa and made the short connect to Volos, where I took the quaint narrow single gauge Pelion train through dense forests, olive groves and beautiful stone bridges to the pretty village of Millies, enjoying a meze and the local speciality (tsipouro) before returning.
• From €45, trainose.gr
Marika

Looking for a winter wonderland train ride of dreams off the beaten path? Look no further than the Dogu Express sleeper train. From Ankara to Kars in the far north-east of Turkey the route is immersed in picture-perfect snow during winter months. The train stops at lofty Erzurum, at 1,757 metres above sea level, a city famous for Çag kebap, horizontally stacked lamb kebab cooked to perfection over burning wood. Orders are collected from passengers prior to arrival at Erzurum, be sure to get your order in. It’s a near-24-hour journey, but don’t worry, there’s a dining car. You won’t have to wait until Erzurum.
• €8, railturkey.org, book at ebilet.tcddtasimacilik.gov.tr
Zayneb

Only two trains a day (6.39am and 5.05pm) take passengers between Mostar and Sarajevo, but an early wake-up is worthwhile when it results in such a spectacular journey. Following the Neretva River far below, the train serves stations without platforms where passengers alight straight into the long grass. For the best view, do as the locals do and ignore your reservation – seats on the right-hand side overlook the almost fjord-like scenery. The sealer? The trip will set you back just over £5. Buy at the station until 10 minutes before departure.
• zfbh.ba, seat61.com
Louise Scarce

This two-and-a half hour trip across northern Spain takes you through the bare, dry hills of the Spanish plateau, past wheat fields and villages of russet and cream houses, before plunging through the gorge of Pancorbo to the wide valley of the Ebro. Beyond, the track rolls through a more rugged, increasingly forested landscape and in the last half hour curves around a long section that hangs below an escarpment with spectacular views to the east before descending slowly to Bilbao. There are usually four trains a day and the cost is about €15 one way.
• raileurope.co.uk
Jim Miller

At six hours, this journey is not an exhausting marathon but takes in some of the best rural scenery Austria and Slovenia have to offer. The daily direct service leaves Wien Meidling at 8.05am and, as the train climbs out of Austria, provides exceptional views of the snow-covered Austrian alps before descending into the jaw-dropping wildflower-covered plains of rural Slovenia. As you approach Ljubljana you’ll be treated to views of the Sava River as its waters crash over dramatic rock formations. Prices are around €44 for the direct service without changing.
• oebb.at
Oscar Webber

Starting in Cluj in Transylvania, the train threads its way past village farms and traditional wooden churches not to mention spectacular mountain scenery. The 200-mile journey is slow travel to savour, as the train stops at numerous local stations and provides the chance to meet Romanian students and locals sharing the old-fashioned corridor-lined carriages. The border town of Suceava, with its Unesco-listed painted monastery, is the final stop from where it’s a short bus ride across the border into Ukraine. The six-hour journey costs just €14 via the Romanian rail website.
Brian Dutton

Looking for a holiday with a difference? Browse Guardian Holidays to see a range of fantastic trips

This article contains affiliate links, which means we may earn a small commission if a reader clicks through and makes a purchase. All our journalism is independent and is in no way influenced by any advertiser or commercial initiative. By clicking on an affiliate link, you accept that third-party cookies will be set. More information.