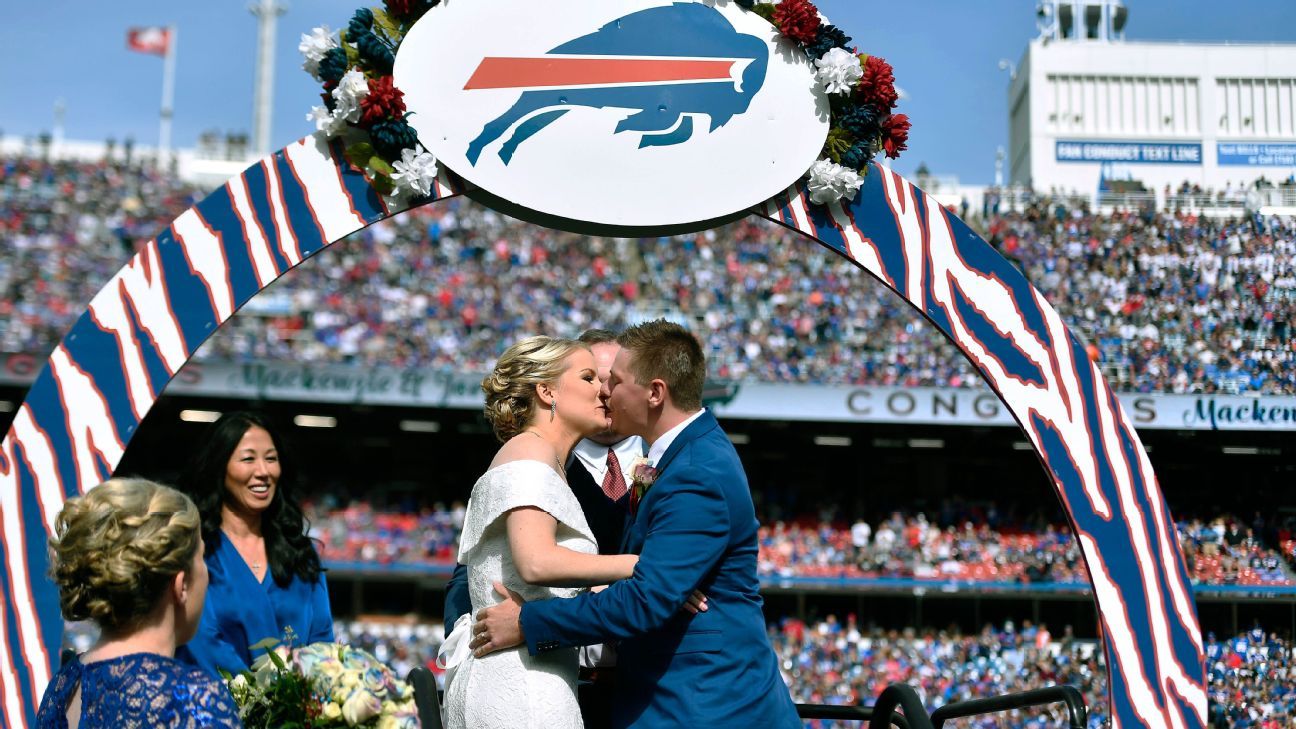 ORCHARD PARK, N.Y. — This weekend, Mackenzie and Jordan Binggeli will cash in on their wedding present from the Buffalo Bills — two tickets to Super Bowl LIV at Hard Rock Stadium in Miami Gardens, Florida.

“I can’t believe we’re going,” Mackenzie said. “We’re going to be wearing our famous ‘bride’ and ‘groom’ jerseys, we’ve worn them to every home game we went to this year. So we’ll stick out in our blue.”

Eleven years after their first date in 2008 when the Bills hosted the Chargers, the couple was wed during halftime of Buffalo’s game against the New England Patriots on Sept. 29, 2019. They were chosen out of a contest pool of more than 1,400 applicants to hold their wedding at New Era Field.

Mackenzie Park and Jordan Binggeli won the @BuffaloBills‘ NFL100 Experience of a Lifetime, and were married halftime of today’s game! Former Bills legends Kyle Williams, @JimKelly1212, @thurmanthomas, and @SteveTasker89 were in the wedding. #NFL100 pic.twitter.com/sha7BTiJ9l

Their engagement also centered around the Bills franchise as Jordan proposed before the Bills played the Saints in November 2017.

Mackenzie noticed something different about the football she and Jordan usually tossed around before Bills games; theirs was a seasoned Nike pigskin, but the one she just caught was a brand-new college sized ball with a hand-written message on its slick surface: “You’ve intercepted my heart, let’s tackle the world together. Will you marry me?

Perhaps the funniest thing about Mackenzie and Jordan winning the Bills’ contest is the fact that they had already booked a wedding venue and set a date for October 2020. The self-described “laid back” couple was in no rush following their engagement, but finally did so at the urging of a few of their family members.

Ironically, they entered the contest at the urging of their family, as well.

“When the competition came out, we’re like, ‘well if we win it, we’ll have two weddings,'” Jordan laughed.

“I just know if I didn’t book that barn venue, we probably wouldn’t have won,” Mackenzie added. “That’s probably how it would have worked out.”

Their wedding day at New Era Field was full of unexpected events for the Rochester-based Binggelis. The most notable happened when Pro Football Hall of Fame quarterback Jim Kelly giving away Mackenzie, whose dad died when she was 16. The Bills made the experience as memorable as possible, according to the couple.

And that was before the gift of the Super Bowl tickets.

“I didn’t know [the Bills would offer Super Bowl tickets]. I said, ‘if I get them, that’s great but if not, I’m still getting a wedding,'” Mackenzie said. “That was big enough for me, and the fact that Jim Kelly walked me out was even bigger … They surprised me with a jersey [with my dad’s name on it] and every little thing, the details were perfect.

“Our first dance, the cake — they were so meticulous. I thanked [Bills co-owner] Kim [Pegula] when I met her, I said, ‘your team did so, so much for me.’ The jersey alone was the greatest touch ever.”

During the rehearsal, longtime Bills defensive tackle Kyle Williams, who also officiated the halftime wedding, foreshadowed that the Bills hadn’t told them everything about what was to come.

Shortly before they said “I do” in front of 70,000 people, Pegula presented the couple with an autographed football signed by the 2019 Bills players.

“But that’s not all,” Pegula said. “I’m not sure what your plans are for your honeymoon, but I suggest some place warm because I have here, two tickets for the Super Bowl game in Miami.”

The wedding of the century happened at halftime.

Mackenzie said that a few former Bills players jokingly suggested to the Binggelis that they sell the tickets — prices start at $4,400 on Vivid Seats. The money could have paid off their student loans, but Mackenzie’s response was a firm “no.” Both agreed “that would be a huge disgrace.”

Instead, the Binggelis are on to Miami. They left New York on Thursday for their AirBnB in Miami Beach, where they will enjoy the Super Bowl along with some South Florida experiences, including an air boat tour of the Everglades, a Miami Heat game and some beach time.

Considering Jordan and Mackenzie hadn’t yet decided on a honeymoon, this South Beach trip will suit just fine.

Jordan said Williams recognizes the couple whenever he sees them.

“Kyle Williams was speaking [at a gala] and before people could ask him questions — he kept looking at me the whole time and this was in November — he goes, ‘Hey you two, how’s the honeymoon?'” Mackenzie said. “And I just looked at him and I stood up and everyone like saw us, and he’s like ‘I married those two right there!'”