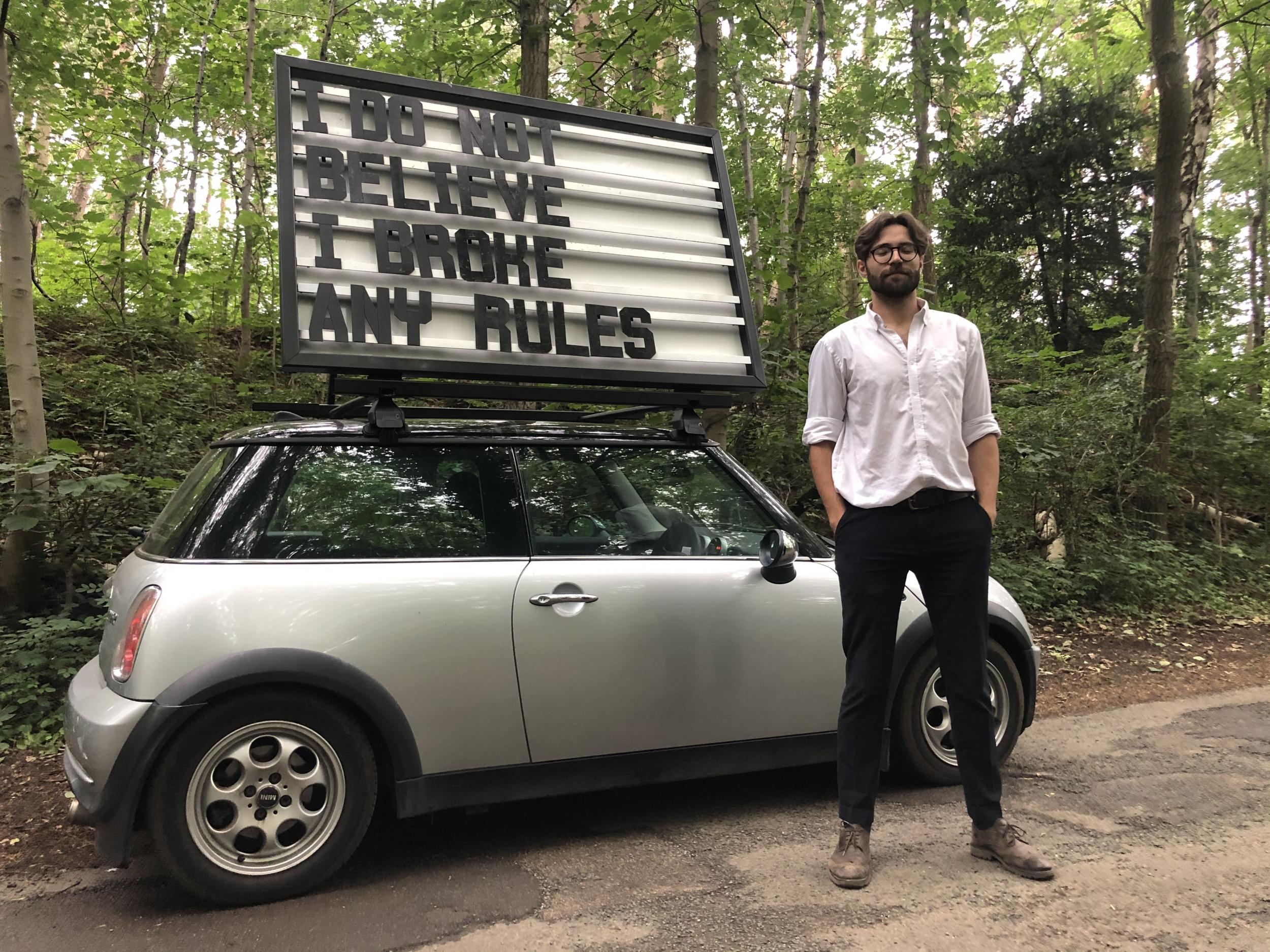 As evening settles over a patch of ancient woodland a mile south of Durham city centre, the tranquillity is shattered by a clatter of steel letters being attached to a metal frame.

This purpose-built frame is part of an artwork created by Sam Edward – and is located on top of a silver Mini Cooper, whose boot is full of boxes, tools and a Scrabble of steel letters.

The artist, who is taking an MA in Art and Education Practices at Birmingham City University, then hoists the assemblage into position. It reads: “I do not believe I broke any rules.”

If that phrase sounds familiar, it may be because you remember it from the most extraordinary TV moment of the coronavirus crisis.

The location: the rose garden at 10 Downing Street. The occasion: the opportunity for the prime minister’s chief adviser, Dominic Cummings, to talk about the journey he made on 27 March from his home in London to his parents’ home in Houghall Woods, with a later side-trip to Barnard Castle.

At the time, strict lockdown was in place across the UK. But as Mr Cummings made clear during his lengthy statement, he did not believe he broke the rules.

“I was worried that if my wife and I were both seriously ill, possibly hospitalised, there was nobody in London that we could reasonably ask to look after our child,” he said.

Mr Cummings maintained his stance when questioned in the garden by the elite of Britain’s political journalists.

That drama, and the journey that lay behind it, led to the creation of what Sam Edward calls “a public text piece” emulating the excursion.

“The art is made in the act of driving, or performance,” he says, as he takes down the structure ahead of the final leg: from Houghall Woods to Barnard Castle.

The work had begun with a 5am drive from his home near Birmingham to Mr Cummings’s house in Islington – which he tracked down through laborious trawling through Google Streetview to match TV footage.

He parked his car outside the adviser’s home, and assembled the phrase: “She was ill – she might have Covid.”

One passer-by, a man in his forties, said: “That’s a bit much, isn’t it.” But 30 seconds later a woman in her thirties with a dog praised the concept as “brilliant,” and took a picture.

The audience for the artwork extends far wider than London N1. The artist livestreamed to his followers on Instagram before setting off for the 270-mile drive north – which, unlike Mr Cummings, Sam Edward was unable to make without stopping.

In Durham, he met the city’s MP, Labour’s Mary Foy, before venturing into the quiet woodland lanes south of the city to display the assertion of innocence by Boris Johnson’s chief adviser.

Then he set the controls for the heart of Barnard Castle, as Mr Cummings had done on Easter Sunday.

“My wife was very worried, particularly given my eyesight seemed to have been affected by the disease,” the audience in the rose garden heard from the adviser.

“She didn’t want to risk a nearly 300-mile drive with our child, given how ill I had been. We agreed that we should go for a short drive to see if I could drive safely. We drove for roughly half an hour and ended up on the outskirts of Barnard Castle.“

“You can start to see why he would want to come up here,” says Sam Edward, as he passes the honey-and-cream cottages in the village of Staindrop – the Cotswold-like overture to Barnard Castle.

“It’s a lovely part of the world.”

It is also an artistic part of the world. On the outskirts of Barnard Castle is a formidable hillside chateau that was home to the coal baron, John Bowes, and his Parisian actress wife Joséphine.

While that collection features fine tapestries and Spanish masterpieces, its most celebrated exhibit is the 18th-century clockwork-powered Silver Swan, with performance art daily at 2pm.

Sam Edward’s Barnard Castle performance, meanwhile, “is part of a collection of work that discusses art and politics, peeling away the facades of political language”. He is on the political left, but lost confidence in Jeremy Corbyn over anti-semitism in the Labour Party.

After a brief sat-nav altercation is addressed with the intervention of The Independent’s Ordnance Survey map, he parks beside the imposing walls of the ruined castle at the heart of the town.

“Have you come to have your eyes tested?” asks Dave Anderson, who was Labour MP for Blaydon until 2017 and now lives locally.

“It’s made us the laughing stock of the world, thanks to Mr Cummings and his friend, Boris.

“But we don’t care because we love the place, it’s a gem. It’s England’s last wilderness, but it’s wonderful.”

Tom Maloney, landlord of the Coach and Horses, chimes in by announcing: “We do have a very good Specsavers, may I say? It used to be a Clarks shoe shop.”

The publican, who happens to be a former Butlins redcoat, says of Dominic Cummings: “He did something silly. If I were him, I would apologise, put it to bed, job done.”

Another resident, Jean Winter, says: “Unfortunately, it’s put us on the political map”. But she supports Mr Cummings.

“His trip to Barnard Castle may have been in breach of lockdown, but I don’t think he wanted lockdown – he wanted to do herd immunity.

“I won’t say what I did in lockdown, but it was pretty similar.”

As the last of the August sun flickers against the castle walls, Sam Edward prepares the finale – with not one message from the past, but two.

The first reads: “I behaved reasonably.” Once it is in position, he perches on a small stepladder and discusses the work and its wider political context with another Birmingham-based artist, Adam Neal, via Zoom.

“The project was made in rage. It’s now condensed down to a disappointment: that there is one rule for them, another for everybody else,” says Sam Edward. ”Perhaps contempt is the word.”

The conversation will linger on as a podcast at the artist’s channel, @thisisasoapbox, just as Mr Cummings’s conclusion has done online: “I know the British people hate the idea of unfairness.

“I wanted to explain what I thought, what I did and why, over this period, because I think that people like me who helped to make the rules should be accountable for their actions.”

A deliberate misspelling or simply a mistake made in the gathering gloom at the end of a motoring and cultural marathon? The creator won’t say.

“I’m just one artist, trying to make a difference.”