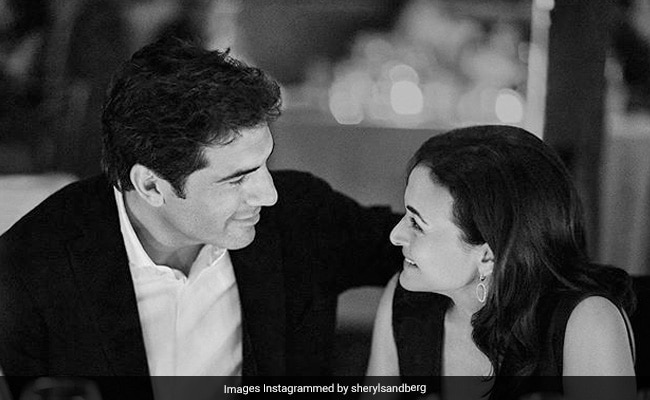 Facebook Chief Operating Officer Sheryl Sandberg announced her engagement to Tom Bernthal on Monday. They were introduced by the brother of Sandberg’s late husband, People reports.

“You are my everything. I could not love you more,” Sandberg wrote of Bernthal in an Instagram post announcing their engagement.

Bernthal is the founder and CEO of the Los Angeles-based strategic consulting agency Kelton Global.

The couple first met through Rob Goldberg, the brother of Sandberg’s late husband, who is a close friend of Bernthal, People reports.

He said the couple bonded over being parents; Sandberg has a son and daughter, and Bernthal has three kids.

“They both see the world in the same way. Their kids are No. 1,” Goldberg said. “They are blending their families and their lives and that’s a testament to how in love they are. They’re building a future going forward together.”

Sandberg’s late husband, Dave Goldberg, 47, died unexpectedly while exercising when the two were on vacation in Mexico in 2015. Sandberg was open about her grief in the aftermath of Goldberg’s death, and spoke about rebuilding her life for the sake of their two young children.

CBS News’ Norah O’Donnell sat down with Sandberg and Goldberg in 2013 for “60 Minutes,” in what turned out to be their only joint television interview. Sandberg was then best known for her bestselling book “Lean In,” which encouraged women in the workplace to stand up for themselves.

Years later, Sandberg talked with O’Donnell about the loss of her husband and how she rebuilt her life.

“My rabbi told me to ‘lean into the suck,'” Sandberg said in an interview on CBS’ “Sunday Morning.” “And I thought, ‘That is not what I meant when I said lean in.’ But it was really good advice. Because what he was telling me [was], ‘This is going to suck. Don’t fight it.'”

In 2017, she published a book about coping with grief and the other life lessons titled, “Option B: Facing Adversity, Building Resilience and Finding Joy,” co-written with friend and psychologist Adam Grant.

As a top executive at Facebook and close ally of CEO Mark Zuckerberg, Sandberg has been deeply involved in handling criticism of how Facebook handles users’ data, as well as numerous scandals involving the spread of misinformation on the social network.