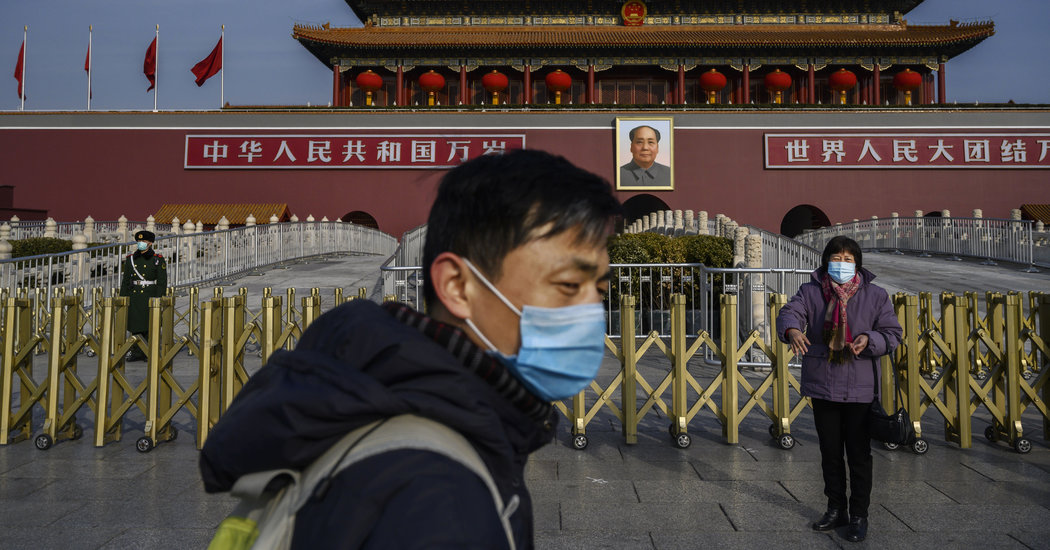 BEIJING — It took thousands of infections and scores of deaths from a mysterious virus for China’s authoritarian leader to publicly say what had become glaringly obvious to many in recent weeks: The country is facing a grave public health crisis.

After his declaration, the leader, Xi Jinping, put China on a virtual war footing to cope with the unfolding epidemic of the coronavirus. He convened an extraordinary session of the Communist Party’s top political body, issuing orders for handling the crisis with the crisp, somber stoicism of a field marshal.

“We’re sure to be able to win in this battle,” he proclaimed on Saturday before his six grim-faced colleagues on the party’s Politburo Standing Committee.

Compared to the very low bar set by the Chinese leadership’s secrecy and inaction during the SARS epidemic in 2002 and 2003, Mr. Xi has responded with speed and alacrity to the latest health emergency, a pneumonialike virus that at last official count has killed 56, sickened thousands in China and spread around the world.

But there are also signs that the government, especially at the regional level in Hubei Province, the source of the outbreak, was slow to recognize the danger and then mishandled the crisis once its gravity became clear.

“Substantively, the response this time is more or less the same,” said Minxin Pei, a professor of government at Claremont McKenna College in California. “Local officials downplayed the outbreak at the initial, but crucial, stage of the outbreak. The media was muzzled. The public was kept in the dark. As a result, valuable time was lost.”

The turnaround from complacency to nationwide mobilization typifies how China can respond to unexpected crisis like a lumbering giant, reluctant to stir, but then capable of shattering urgency. It represents both sides of the authoritarian political bargain under Mr. Xi.

A fear of upsetting the party’s protocols and leaders’ desire for unruffled stability can deter even officials who want to do well by the public. Conversely, the government can operate with brutal efficiency when it wants.

It was only after a brief written statement under Mr. Xi’s name on Jan. 20, when he was touring a military base and shopping exposition in Yunnan Province, that the vast Chinese state bureaucracy began to shudder into action.

Officials then quickly acknowledged the dangers of the coronavirus and ordered drastic measures to stop the spread — perhaps, experts said, belatedly — including the lockdown of much of the province where the epidemic emerged, penning in tens of millions of people. The government also ordered the construction of two hospitals in Wuhan to deal exclusively with patients afflicted with the coronavirus, which are expected to open within days, not months or years.

“The thing about China is that they can mobilize agencies and resources faster than anybody else can,” said Richard McGregor, a senior fellow at the Lowy Institute in Sydney and author of “Xi Jinping: The Backlash.” “The other side is that they can conceal things.”

“In China there is no independent entity that can get on the front foot and disseminate information,” he added.

From a localized medical mystery a few weeks ago, the coronavirus has erupted as one of the most complex and unpredictable tests for Mr. Xi since he came to power more than seven years ago. Over that time, he has by some measures established himself as the most formidable Chinese leader since Mao Zedong.

The epidemic and the effectiveness of the government’s response remain subject to many unknowns, but the outbreak comes at a time when Mr. Xi has already been facing quiet whispers about his political acumen. In the past year, he has experienced repeated setbacks on some of the most vital issues on his agenda.

Protests against China’s tightening grip continue to convulse Hong Kong. Rancor with Washington was only partly eased by a trade deal that some said required China to promise too many concessions. Two weeks ago, voters in Taiwan, the island democracy that Mr. Xi has made clear should join a greater China, resoundingly re-elected a president despised by Beijing.

Mr. Xi’s sheer dominance, according to several experts and political insiders, may be contributing to his problems by hampering internal debate that could help avoid misjudgments. Beijing, for example, has underestimated the staying power of the protesters in Hong Kong and the public support behind them.

“It’s a paradox,” said Rong Jian, an independent scholar of Chinese politics in Beijing. “It’s precisely because Xi is so powerful that policy problems often arise — nobody dares disagree, and problems are spotted too late.”

While state and local officials have been criticized, the public health system has been credited with responding effectively, particularly compared to the response to the SARS crisis.

In that case, officials covered up the extent of the viral outbreak for months, almost certainly abetting its spread and exacerbating the death toll, which reached nearly 800.

This time, even as officials in Wuhan said nothing publicly, government scientists shared information with the World Health Organization on the last day of 2019, isolated the virus, and posted details about it on an international database 10 days later.

That allowed experts from around the world to quickly conclude that the new coronavirus, like the one from SARS, had very likely originated in bats and made the leap to humans through infection of another mammal in a market in Wuhan.

The Lancet, one of the leading medical journals, praised China’s handling of the outbreak so far in an editorial.

“The lessons from the SARS epidemic — where China was insufficiently prepared to implement infection control practices — have been successfully learned,” it wrote. “By most accounts, Chinese authorities are meeting international standards and isolating suspected cases and contacts, developing diagnostic and treatment procedures, and implementing public education campaigns.”

The journal went on to emphasize that the ultimate success of the response would “depend on maintaining trust between the authorities and the local population.”

Mr. Xi’s government, despite its call to arms, may have already undercut that trust.

On the local level in Wuhan, people have vented anger and frustration, which is percolating on social media despite censorship. In widely circulated, and then censored, comments, a senior journalist with The Hubei Daily, the province’s main party newspaper, called for a change of leadership in Wuhan.

“With this extraordinarily grim situation worsening and expanding by the day, those currently in office lack that commanding leadership,” the journalist, Zhang Ouya, wrote on Sina.com Weibo, a popular Chinese social media service.

There is evidence, too, that the local authorities kept a lid on the crisis in the first days of January so as not to upset cheerful tone for a provincial legislative session that is a highlight of the local political cycle.

“This year will be a major landmark year,” Wang Xiaodong, the provincial governor, told the legislative members. “Let us unite even more closely around the party central leadership with Comrade Xi Jinping at the core.”

“China is a much more decentralized place than it appears,” said David Cowhig, a former American diplomat who served 10 years in China and monitored health and science issues.

“Local officials have great discretion; China is a coalition of ‘little’ Big Brothers,” he said. “Xi realizes this and is trying to re-centralize China.”

Yanzhong Huang, a senior fellow for global health at the Council on Foreign Relations who studies China, said that the centralization of power since the SARS crisis did not appear to have strengthened expertise at the local level or the willingness of underequipped regional hospitals to report.

“I think the central health authorities are trying to be more transparent,” he said, “but the local government remains loath to share disease related information in a timely and accurate manner.”

Not all the blame can fall on the officials in Wuhan.

The central authorities still control the political and propaganda apparatus, which has sought to minimize the severity of the crisis. Before the standing committee’s meeting on Saturday, Mr. Xi and other senior officials went about their business as if there were no crisis, appearing at a banquet on Thursday in the Great Hall of the People to celebrate the Lunar New Year.

When he did speak, Mr. Xi emphasized the need for preserving public stability.

The phrase alludes to the fear of popular unrest boiling over, which is, as ever, the party state’s highest priority. It could become a reality if the epidemic, as predicted, inflicts sustained hardship on the economy and people’s livelihood.

“The truth is in a public-health emergency; it’s not just the medical professionals who matter,” Mr. McGregor said. “It’s the management of it in the government and in the public that matters, too. It’s hard to argue that they’ve done that well.”