A look at what’s happening around the New York Jets:

1. Mission — P&P: General manager Joe Douglas said the objective in his first NFL draft with the Jets was to provide protection and playmakers for quarterback Sam Darnold. He nailed the protection part, taking mammoth left tackle Mekhi Becton in the first round (No. 11 overall). The playmakers? It depends on wide receiver Denzel Mims, the key to the Jets’ entire draft.

If Mims doesn’t develop quickly, it will have a negative effect on Darnold, who lost his No. 1 target (Robby Anderson) in free agency. Surprisingly, Douglas, who passed on every wide receiver to draft Becton, didn’t take another wideout after Mims in the second round. That means it’s Denzel-or-bust in what many experts called the most talented receiver draft in history.

Mims is a size-speed phenom who made a lot of money with his Senior Bowl and scouting-combine performances, but he fell to the bottom of the second round, the 13th wide receiver off the board. Douglas passed on him with the 48th pick, trading down 11 spots and grabbing him at 59. A genius move? Perhaps. Or maybe he got too cute, as he missed out on Chase Claypool and Van Jefferson — two highly touted receivers. Time will tell. 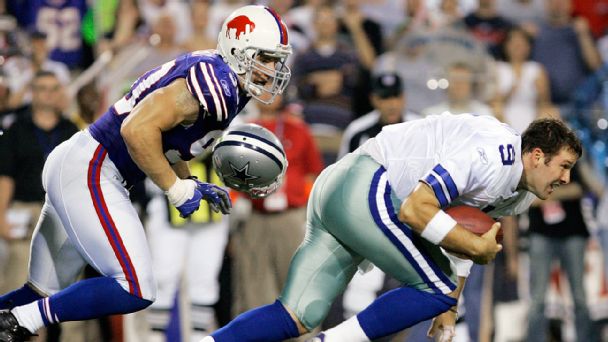 • MNF Classics: No Wade revenge vs. Bills
• These aren’t Rodgers’ Packers anymore
• Mahomes got his man in Edwards-Helaire
• Raiders drafted to compete with Chiefs
• 2020 NFL draft analysis for every pick

At 6-foot-3, Mims blazed the 40-yard dash in 4.38 seconds at the scouting combine, and his three-cone time (6.66 seconds) was the best among wide receivers. The Jets love his catch radius and say he plays above the rim. So, how could a receiver with Julio Jones-like measurables fall to 59th? He dropped 20 passes over his final three seasons, including 11 in 2018 (an injured hand might have been a factor). He also played in an unsophisticated passing scheme at Baylor, where the staff tried to exploit his deep speed. In 2019, he ran the “go” route more than any other, according to ESPN Stats & Information research.

As one opposing scout wondered, when was the last time a Baylor receiver hit it big in the NFL? The answer is never.

The ideal situation would be to bring Mims along slowly and let him learn from a veteran, but the Jets might not have that luxury. They’re still thin at the position, with recently signed Breshad Perriman (an older version of Mims) their only starting-caliber outside receiver. They could really use Quincy Enunwa, a physical possession receiver, but his future is murky because of a neck injury.

Unless they add a veteran, the Jets will need Mims to play immediately — and that’s a big ask of a rookie, considering there won’t be an offseason because of the coronavirus pandemic restrictions.

“We’ll get him caught up as fast as we can when we’re able to do the virtual stuff,” Jets coach Adam Gase said. “By the time he steps on the field, hopefully he has a good grasp [of the offense]. I feel like we’ll have figured out how far he goes mentally, and we’ll take advantage of what he knows and allow him to do the things he does really well as much as possible.”

If the Jets are right about Mims, they will have given Darnold a true WR1. The new teammates already have become texting buddies. If they’re wrong about Mims, it’ll be Stephen Hill all over again.

Check out how the 2020 NFL draft was a family affair, brought us all together and changed the lives of so many.

2. Grading Douglas: How did he fare in his first draft? It’s impossible to give a letter grade, but let’s say this:

For the most part, Douglas’ selections came off the board where expected, which means good value. He hit two big needs: offensive tackle and wide receiver. He improved the team speed, particularly with the first four choices. He showed flexibility by making three trades — two pick swaps and a third for veteran cornerback Quincy Wilson. He improved the overall depth on Days 2 and 3.

On the downside, Douglas took too long to address the cornerback need, waiting until the fifth round for Bryce Hall (coming off ankle surgery). He went light at receiver, putting his eggs in the Mims basket. The fourth round was too early for a developmental quarterback, James Morgan, but that might be a nitpick because of the value of the position.

All in all, Douglas did solid work.

3. Next on the agenda: With the draft in the books, the front office needs to turn its attention to safety Jamal Adams, who is eligible for a contract extension — and isn’t shy about expressing his desire for a new deal. Don’t expect anything to happen in the near future. This probably will linger into training camp and perhaps beyond.

If Douglas had any intention of trading Adams, he would have done it before or during the draft. We’ve seen star players get traded close to the season — see: Khalil Mack to the Chicago Bears in 2018 — but it seems the Jets want to work it out with Adams.

Douglas declined to comment on whether he received trade inquiries.

“I’m not going to get into any discussions that we had,” he said at the conclusion of the draft. “My stance on Jamal hasn’t changed. At some point, we’re going to deal with him and his representatives.”

4. Green Bay to Gang Green: Morgan was the most intriguing pick on Day 3. Whenever the Jets draft a quarterback, it’s news — and they do it quite often. They have picked 10 in the past 15 years, the most of any team.

The Jets were the only team to have an official interview with Morgan at the combine. They did a lot of work on him and fell in love with his arm and intangibles, mainly his intelligence. (He reportedly scored a 27 on the 50-question Wonderlic test.)

“You can never have enough [quarterbacks],” Douglas said. “It was an opportunity to get a young quarterback that can develop with and behind Sam. You need to have depth, especially at that position, as we found out last year.”

Presumably, Morgan will work out better than Luke Falk.

Morgan grew up in the shadow of Lambeau Field, idolizing Green Bay Packers legend Brett Favre. “My hero,” he said. Like Favre, Morgan has some gunslinger tendencies, forcing the ball into coverage. He also has confidence.

“I think I can make any throw on the field,” Morgan said.

Morgan projects as the third-string quarterback, behind Darnold and David Fales (for now).

6. Sunshine state of mind: It seems the Jets have an affinity for players from the state of Florida. In addition to Morgan, they drafted two from the University of Florida — defensive end Jabari Zuniga and running back La’Mical Perine. They capped the draft by trading for Wilson, the former Indianapolis Colts corner and a former Gator.

“We went back to Gainesville to get another player,” Douglas said of the Wilson trade.

Wilson will be reunited with former college teammates Marcus Maye and Brian Poole in the secondary.

7. Promises, promises: Say this for Douglas: He kept his vow to rebuild the offensive line. Of the top 10 players on the depth chart, only three are holdovers — Brian Winters, Alex Lewis and Jonotthan Harrison. There’s a good chance the Jets will have four new starters, which should make Gase happy.

“I think we got a lot accomplished,” he said. “I think it turned out as good as we could’ve hoped for.”

8. O captain, my captain: As expected, Douglas placed an emphasis on football character. In fact, the Jets’ final five picks were team captains in college, including punter Braden Mann. Douglas wants to change the culture; that’s a good way to start.