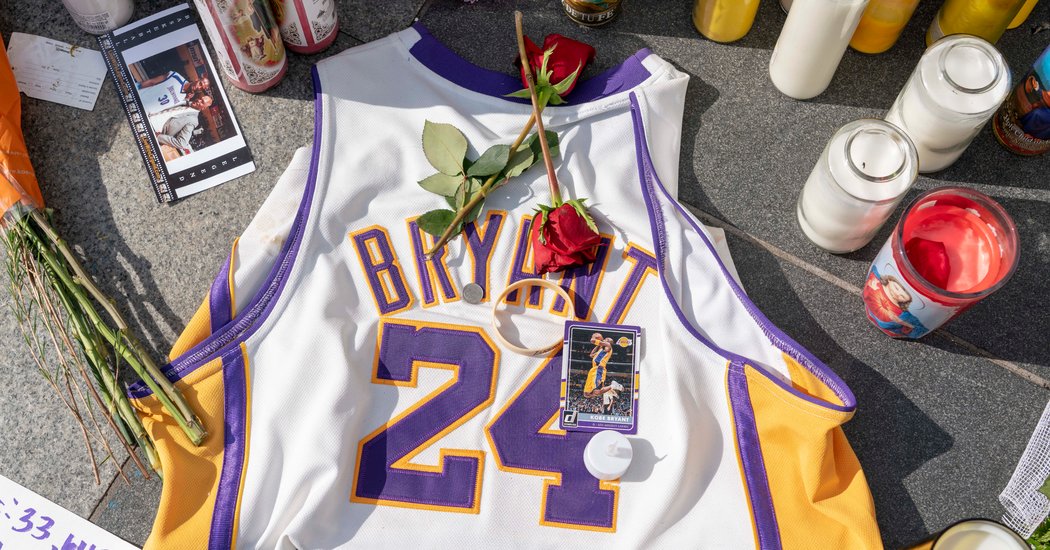 Kobe Bryant believed it on the day he was drafted into the N.B.A. as a 17-year-old in 1996. He made sure the scribes who watched him score 27 points in his first summer league game with the Los Angeles Lakers knew he believed it, too.

Bryant was going to the Basketball Hall of Fame. He was sure of it from the very beginning.

One of the countless painful realizations to unspool from the helicopter crash that killed Bryant, his 13-year-old daughter, Gianna, and seven others is that Kobe will not be there for the induction he envisioned from boyhood. In April, Bryant is certain to be officially selected alongside his longtime former rivals Tim Duncan and Kevin Garnett as the headliners of the Hall’s star-studded 2020 class — except he won’t be at the induction ceremony in Springfield, Mass., in August to deliver the unforgettable speech he surely had planned.

Such is the sledgehammer nature of Bryant’s sudden death at just 41: All kinds of consequences, big and small, start hitting you. I always believed that Magic Johnson’s announcement on Nov. 7, 1991, that he had H.I.V. would forever stand as the N.B.A.’s answer to the assassination of President John F. Kennedy for people of a certain age, but I’m afraid there is a new contender.

Historians will record Jan. 26, 2020, as perhaps the saddest date this league has ever witnessed. One of the strongest hints came when Duncan, famed for concealing his emotions from N.B.A. audiences, could be seen weeping on the Spurs’ bench as the San Antonio crowd paid tribute to Bryant on Sunday night.

Duncan, a first-year assistant coach with the Spurs, was hardly alone with his tears and sorrow. The Nets’ Kyrie Irving, just to name one prominent example, asked not to play in Sunday’s game against the Knicks, overcome by grief after the death of a legend he proudly cited as his inspiration.

The Yankees’ Thurman Munson was my favorite player on the first team I ever loved, and he died in the middle of the 1979 M.L.B. season in the crash of a small plane he piloted. Yet word moved so slowly back then.

Relatively new to California after relocating from Western New York, I relied on newspaper coverage and intermittent television and radio updates to try to make sense, as a 10-year-old, of the first sports death to really rock my world. I have long wondered how a death like Munson’s would have been processed by sports fans in the social media era. Sadly, we all have that answer now after watching the outpouring of anguish from a generation of players who grew up idolizing Bryant.

Jamal Crawford, one of Bryant’s on-court contemporaries, smartly captured the paradox of how it feels now to be endlessly consuming social media morsels in the wake of a modern sports tragedy — while shouting at your screen for someone of authority to announce that the whole thing was a misunderstanding. As Crawford posted on Twitter: “This will never seem real.”

It’s a common sentiment. Bryant may have retired in April 2016, but the five-time N.B.A. champion was widely regarded as an immortal, especially for Angelenos.

Any consideration of Bryant’s legacy mandates a discussion of the felony sexual assault charge he faced in 2003. He was accused of raping a 19-year-old woman who worked at a Colorado hotel as a front-desk clerk. The prosecutors dropped the case when the woman said she was unwilling to testify; Bryant publicly apologized to her after they settled a civil case out of court.

The case changed the way many people viewed him, but rarely so in Los Angeles. In Southern California, once he outlasted his Lakers teammate Shaquille O’Neal, Bryant became more beloved than any superstar athlete who proceeded him: Magic Johnson, Wayne Gretzky, Fernando Valenzuela, Sandy Koufax, Jerry West or whomever else you wish to nominate.

I moved to the area in third grade and lived there long enough to become a Lakers beat writer for the Los Angeles Daily News, privileged to have a front-row seat in the summer of 1996 when West, as the Lakers’ general manager, found a way to import both O’Neal and Bryant to Lakerland.

There will always be a lingering sense of underachievement around the Shaq-Kobe partnership, which dissolved after they won three titles in eight tension-filled seasons together. But Bryant moved past the notion that the split left rings on the table by pledging his life to the franchise and barging into a stratosphere of his own, with his jaw jutting out and face clenched in his signature fashion.

My favorite memories range from the obvious to the sublime. I will certainly never forget Bryant’s 81-point game against the Toronto Raptors in January 2006, which upstaged the N.F.L.’s conference championship games, or the 62 points he scored in three quarters against the Dallas Mavericks as a prelude the previous month.

I remember hearing stories about Bryant repeatedly quizzing Casey Smith, the longtime Mavericks and U.S.A. Basketball athletic trainer, about Dirk Nowitzki’s preparatory routines — in part so the maniacally driven Bryant could confirm that no one, not even Nowitzki, was outworking him.

Bryant’s relentless hunger to match (or even top) Michael Jordan — which he shaped in later years to be known as his so-called Mamba Mentality — made him a ruthless, stubborn and isolated teammate at times. Clashes in those early days with O’Neal and Coach Phil Jackson were constant. Yet I can still picture the way Bryant, as he moved into his elder statesman phase, would readily allow foreign journalists to defy protocol and snap selfies with him in the buildup to the 2012 Olympics in London because he took such pride in his role as a worldwide ambassador for the game.

I likewise can’t shake the image of a brazen Bryant, in head-to-toe United States men’s national basketball team gear, deciding to walk along the main shopping boulevard in Manchester, England, shortly before those Olympics began. Unconcerned with the prospect of fans recognizing him, he did the same thing days later in a crowded section of Barcelona near the team’s hotel.

Perhaps he couldn’t quite match Jordan’s résumé, but Bryant certainly managed to create a worldwide, Jordanesque mystique of his own. At the FIBA World Cup in September, he had an arena in Beijing cheering louder for him than Yao Ming, the Chinese superstar.

Bryant was likewise a world-class talker, whose hyperfocused chase for basketball glory didn’t stop from him giving a handful of reporters revealing glimpses along the way. At his final All-Star Game in Toronto in 2016, I was working as the sideline reporter for ESPN Radio. Bryant made himself accessible as always, even amid the typical chaos on the floor at the buzzer. Andy Bernstein, the longtime N.B.A. photographer, snapped a shot of me asking Bryant a few questions.

Without warning last year, that picture became a dream-come-true possession when the sports brand Panini turned Bernstein’s snap into my very own basketball card after I won the Hall of Fame’s Curt Gowdy Award.

I saw Bryant just a few weeks ago at Staples Center, where he was sitting courtside with Gianna to take in a LeBron James vs. Luka Doncic duel, but I never had a chance to show him the card. I figured there would be plenty of opportunities later to hand him one and share a laugh about the hard-to-fathom circumstances that landed a highly insecure sportswriter in the same collectible frame alongside the most confident dude I’ve ever covered or encountered.

Kobe surely would have said he knew it was possible all along. For one of us, anyway, he was right from Day 1.