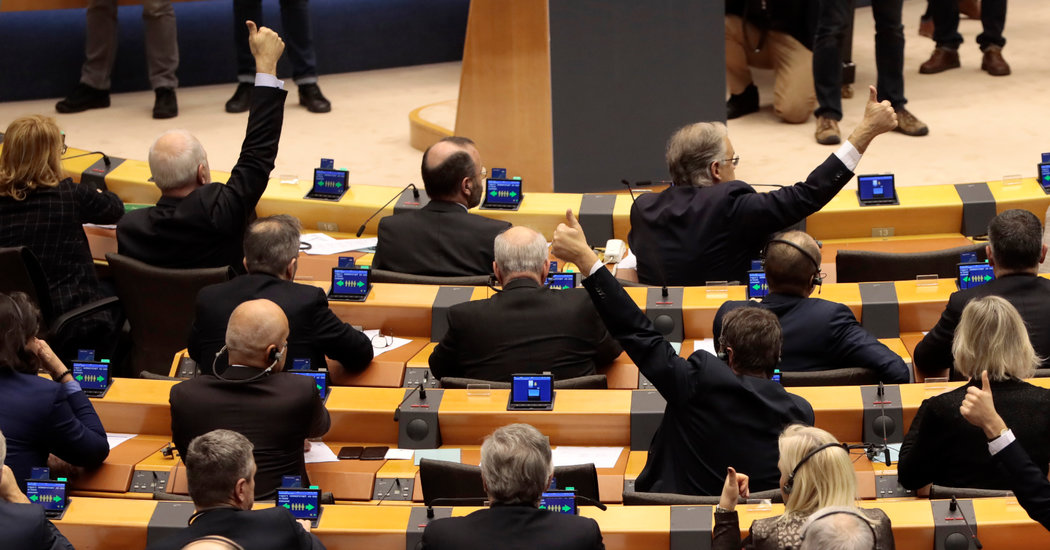 LONDON — It’s done. At last. The European Union gave its final, formal approval to Brexit on Thursday, clearing the way for Britain to reverse 47 years of integration with the Continent and leave the bloc on Friday night.

Following a sometimes emotional vote in the European Parliament on Wednesday, the governments of the 27 countries still in the union gave a unanimous seal of approval to Britain’s withdrawal, officially ending nearly four years of impassioned wrangling over whether, when and how it would happen.

In the end, the way the decision became final was vintage Brussels: bureaucratic and undramatic.

Diplomats from the remaining member countries were given plain instructions over email just after 8 p.m. Wednesday: Answer these four dry, procedural questions with “yes,” “no,” or “abstain” and send them in an email to the European Council, which represents the nation’s leaders.

At 1 p.m. Thursday, the replies came in — a foregone conclusion, but the last step needed for the withdrawal agreement to take effect. All member states answered “yes” to all the questions, a European Union official said.

On the biggest questions, the European Council meets in person, often with presidents and prime ministers representing their countries.

But on Thursday, as if to emphasize how anticlimactic the event was, it used a vote-by-email process reserved for technical decisions that don’t require top officials or august gatherings. And it cloaked the news in the drabbest possible language.

“The council has adopted, by written procedure, the decision on the conclusion of the withdrawal agreement on behalf of the E.U.,” the European Council said in a brief statement.

“The withdrawal agreement will enter into force upon the U.K.’s exit from the E.U., on 31 January 2020 at midnight” in most of Europe, 11 p.m. in Britain, it added. “From that time on, the U.K. will no longer be an E.U. member state and will be considered as a third country.”

In Brussels, some of the next steps will be just as formal and muted, before the negotiations on the future relationship between the European Union and Britain go into full swing.

But first come the parties. Place Luxembourg, the square in front of the European Parliament, will be taken over by Brexit-related celebrations and commiserations Thursday night, and Brexit-themed events are filling up the weekend’s social calendar.

The city of Brussels said that it would light up the Grand Place, the ornate square in the heart of the Belgian capital, on Thursday afternoon, putting on a light show with colors of the British flag to honor the departing nation. Manneken Pis, a statuette of a boy urinating that is a Brussels landmark, has been dressed up for the occasion.