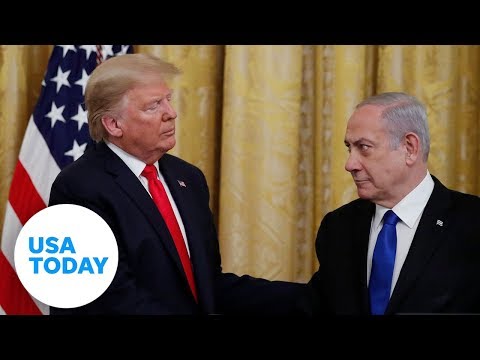 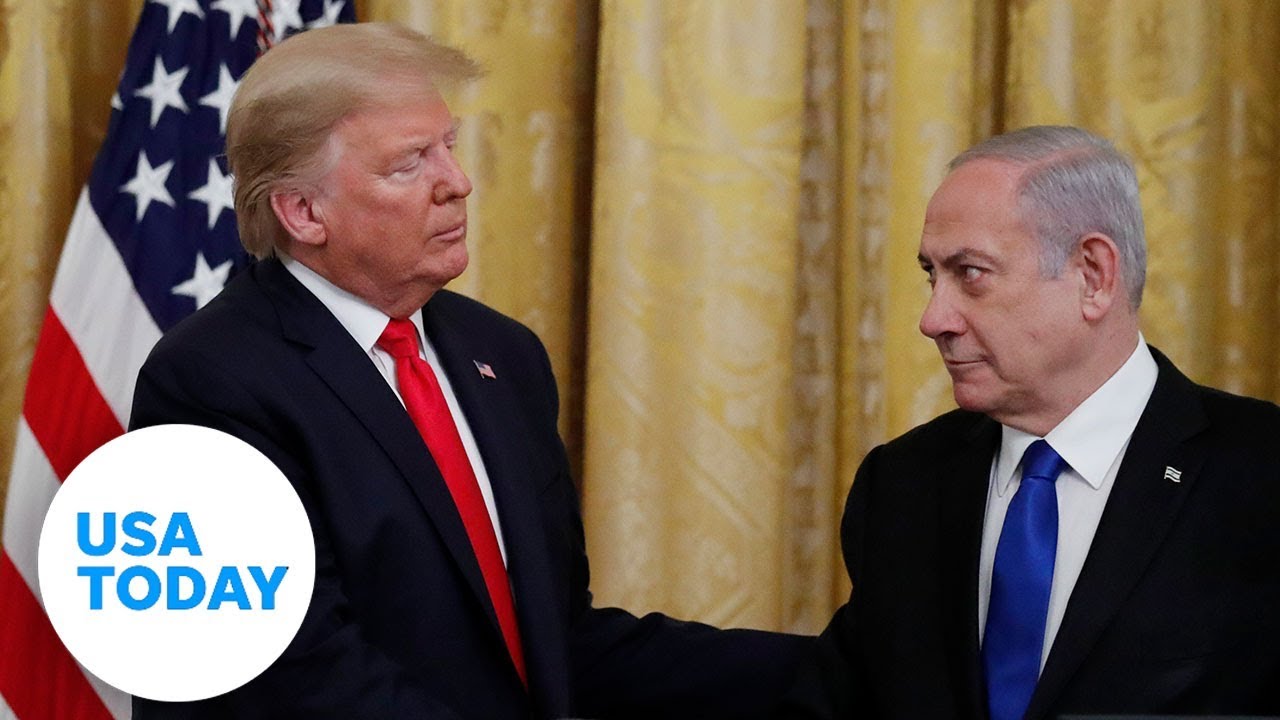 President Donald Trump unveiled details of his administration’s long-stalled plan for peace between Israelis and Palestinians on Tuesday, though the proposal’s critics warned before its release it has little chance of success because of its pro-Israel slant.

Trump’s plan is intended to defuse decades of hostilities between Israelis and Palestinians. In a surprise move, the initiative called for an independent Palestine sitting alongside Israel – a “two-state” solution – with East Jerusalem serving as its capital. A “two-state” solution has been a hallmark of Israeli-Palestinian peace initiatives for years, but ahead of the plan’s release there was speculation Trump might omit it.

Details about the initiative’s economic proposals, including $50 billion in infrastructure spending and investment over 10 years for the Palestinian territories and neighbors Jordan, Egypt and Lebanon, have been previously announced.

But the plan’s political aspects have been a closely guarded secret. Its release, after three years in the making, comes as Trump hosted Israeli Prime Minister Benjamin Netanyahu and his chief political rival Benny Gantz at the White House to discuss the plan. It was not clear if an invitation was extended to Palestinian leaders.

Trump described his plan as a “historic breakthrough” and said he had written to Palestinian Authority President Mahmoud Abbas, saying that territory set aside for the Palestinian state would remain open for a “transition” period of four years in what amounts to a four-year freeze in new Israeli settlement construction.

He said the deal, outlined in an 80-page document, was a “win-win” for Israelis and Palestinians. The plan more than doubles the territory currently under Palestinian control. It also recognizes Israeli sovereignty over major settlement blocs in the West Bank, a scenario that many Palestinians will find difficult to accept. The plan also appears to limit Palestinians to specific parts of East Jerusalem and leaves Israel in sole charge of Holy Sites that in Jerusalem that are sacred to both sides.

Netanyahu said Israel owes Trump an “eternal debt of gratitude.” He said that Trump was the greatest friend Israel has ever had in the White House.

“While Trump claims a revolutionary approach to the peace process, this plan actually recycles past failed efforts: it places Palestinians on probation while they prove their worthiness of statehood, using conditions that are malleable and ill-defined; it seeks to induce Palestinian capitulation through economic largesse; and it removes the onus on IsraeI to make any concessions until Palestinians declare their full surrender,” said Tareq Baconi, a Middle East expert at International Crisis Group, a think tank.

The peace plan has been spearheaded by Trump’s son-in-law Jared Kushner, White House adviser Avi Berkowitz, former Middle East envoy Jason Greenblatt and David Friedman, the United States Ambassador to Israel. All four men have deep religious and educational ties to Israel – factors that have undermined their legitimacy as honest brokers in the eyes of many Palestinians.

This “‘peace’ plan ignores the legitimate rights of the Palestinian people and, thus, will continue to perpetuate the conflict,” said Yousef Jabreen, an Arab Israeli member of Israel’s Knesset, or Parliament. Estimates vary, but about 1.84 million Arabs are thought to live inside Israel, according to Israel’s Central Bureau of Statistics. An additional 5 million live in Israeli-occupied territories in the West Bank and Gaza Strip.

Attempts to solve the Israeli-Palestinian conflict have stagnated for years despite numerous high-profile and rigorous American-brokered attempts at diplomacy.

Trump’s plan was delayed in part by back-to-back elections in Israel last year that left Netanyahu in a virtual tie with Gantz, with neither able to cobble together a ruling coalition. A third election is planned for early March. The deadlock was deepened by Netanyahu’s indictment for bribery, fraud and breach of trust charges. Netanyahu pulled a request for immunity from prosecution over these charges just hours before parliamentary proceedings over the issue were set to begin in Israel on Tuesday.

Netanyahu has denied any wrongdoing.

‘It’s a great plan’:Trump to release peace proposal before meeting with Israeli leaders

There are different views about what caused previous peace efforts to fail.

There is also divergence over what the peace process correctly entails. But at its core it’s a dispute – one of the world’s longest-running – over ancient land that two peoples, Jews and Arab Palestinians, both lay claim to for their respective states.

The 1967 war that Israel successfully fought with neighboring Egypt, Jordan and Syria ended with it in military control of two areas that have large Palestinian populations: the West Bank, nestled between Israel to the west and the Jordan Valley to the east, and the Gaza Strip, an isolated Hamas-controlled enclave on the Mediterranean Sea.

Israel has imposed a sea blockade and built a security fence around Gaza, where militants have launched thousands of rocket and mortar attacks on Israel. Hamas, which the U.S. State Department has designated a terrorist organization, has fought several wars with Israel, most recently in 2014. Recent rounds of renewed, sporadic fighting resurfaced in May last year but ended relatively quickly with informal truces.

Palestinians have branded Trump’s plan – dismissively, because of his real-estate roots – as the “Deal of the Century.” Trump himself has also used variations on this phrase to describe it. Ahead of the announcement, Trump said Palestinians might react negatively to his plan at first, but that “it’s actually very positive for them.”

Trump added: “It’s a great plan. A plan that really would work.”

He said Tuesday it has been “a long and very arduous process to arrive at this moment.”

Officials from the United Arab Emirates and Bahrain attended the plan’s release at the White House along with senior Israeli officials and U.S. diplomats. Jordan warned against “annexation of Palestinian lands” in response to Trump’s plan.

Every American president in modern times, citing shared history and values and an unshakeable security commitment, has been staunchly pro-Israel.

But Trump has done more than any other to rally behind Israel’s interests.

He has undertaken a series of firmly pro-Israel actions that include moving the U.S. Embassy from Tel Aviv to Jerusalem, which Palestinians also claim as part of their future capital; recognizing the Golan Heights as belonging to Israel instead of Syria, in defiance of international law; and pulling the U.S. out of the 2015 landmark Iran nuclear deal with world powers, an accord that Israel, Iran’s sworn enemy, firmly opposed.

The Trump administration has also backed the expansion of Israeli Jewish settlements, no longer viewing them as illegal under international law, closed a Palestinian diplomatic office in Washington, D.C. – its de facto embassy – and withdrawn all funding for Palestinian-related aid projects including those focused on water resources and schools.

“We have had no better friend than President Trump,” Netanyahu, Israel’s leader, said before the plan’s release. “With this (White House) invitation, I think that the president is seeking to give Israel the peace and security that it deserves,” he added.

Last year, Netanyahu, in a sign of his government’s appreciation for Trump’s Israel policy moves, inaugurated a planned Israeli community named “Ramat Trump” in Hebrew, or “Trump Heights,” in the Golan Heights about 12 miles from Syria’s border.

“Most Israeli Jews welcome (Trump’s peace plan), said Moshe Maoz, a Middle East expert at Hebrew University, in Jerusalem. “Particularly Netanyahu, who hopes that this would help him to do away with his indictments.”

Susie Gelman, chair of the Israel Policy Forum, a New York-based American Jewish organization that works for a negotiated two-state solution to the Israeli–Palestinian conflict, said that Trump’s plan will “provide the Israeli government with the excuse to proceed with unilateral moves such as annexing parts of the West Bank.” She said this would “place the future of Israeli-Palestinian peace in great jeopardy, thereby posing a serious risk to Israeli security and to Israel’s future as a Jewish and democratic state.”

But Michael Makovsky, president and CEO of the Jewish Institute for National Security of America, a Washington, D.C.-based pro-Israel think tank, said that it was important that Trump was following through on his promise to release the plan.

“What matters is the substance: It’s long past time that the U.S. introduce new parameters, ones that are more realistic than past efforts, that have hopefully learned the lessons of past failures and can form the foundation of a successful effort.”

And Steve Scalise, R-La., praised Trump’s plan, saying it “provided a path to new negotiations and a lasting peace that preserves the Jewish state of Israel, and provides a path for a recognized Palestinian state.”

“A reminder to the international community: Israel is an occupying power on the state of Palestine,” Saeb Erekat, a Palestinian diplomat, said in a WhatsApp message before the plan’s release. “Any deal … that ignores this fact, will be recorded in history as the ‘Fraud of the Century.”’

Mustafa Barghouti, a former Palestinian lawmaker and onetime presidential candidate, said that “it is a very bad plan for peace. It will … consolidate a system of Israeli apartheid against Palestinians. That’s not sustainable.”

Palestinian Prime Minister Mohammad Shtayyeh denounced the long-anticipated Trump administration peace proposal as a plan that violates international law and “comes from a party that has lost its credibility to be an honest broker in a serious and genuine political process.”