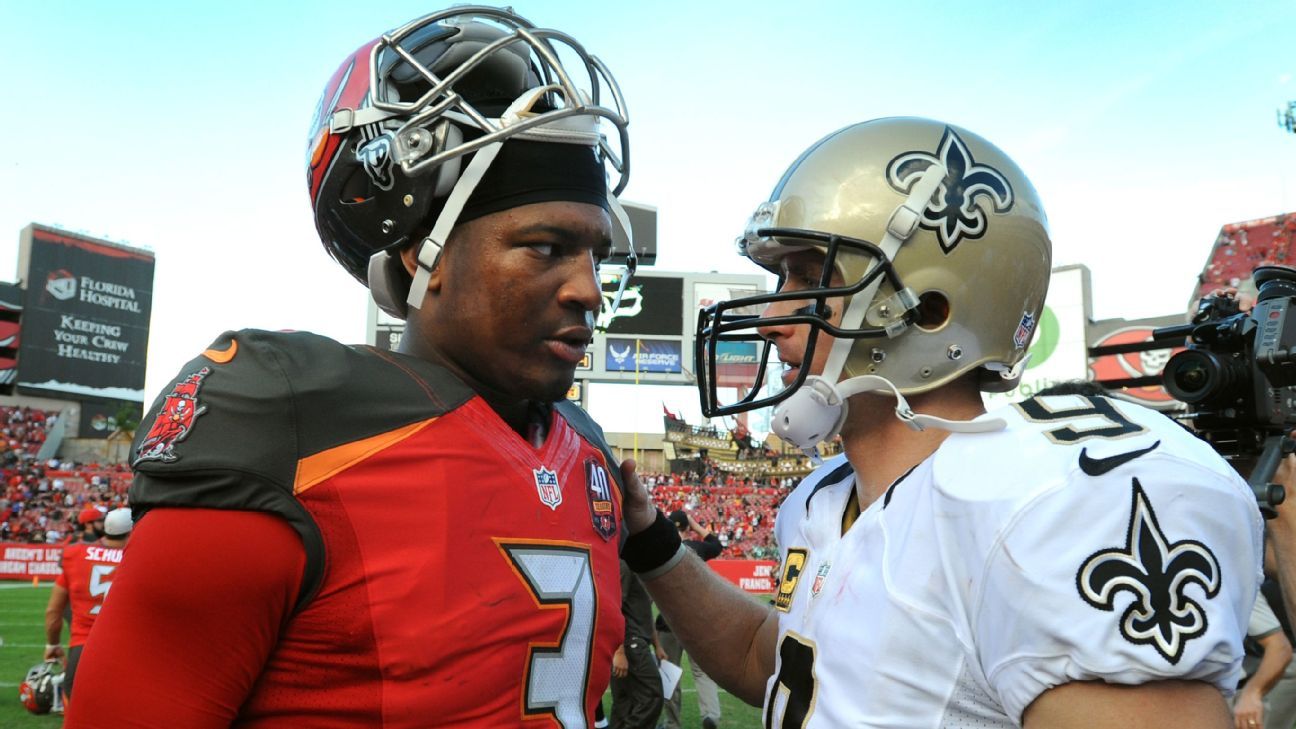 METAIRIE, La. — Jameis Winston has proudly boasted for years that he was the first kid to get an autograph from Drew Brees after Brees joined the New Orleans Saints in 2006. Winston, who had just turned 12, grew up near Birmingham, Alabama, where Brees was rehabbing from shoulder surgery at the time.

Winston, 26, admitted Wednesday that he lost that autographed picture. But now the quarterback will get an even better experience: learning from Brees firsthand after signing a one-year deal with the Saints.

“There’s only a few people in this league that actually follow up with you when you ask them a question, when you reach out to them,” said Winston, who said he also got the chance to spend time with Brees at the Rock Church in San Diego before being drafted No. 1 overall in 2015. “And ever since then, he’s always been a guy that I can hit up during the season and ask a question, and he’ll get back with me.

“So I just love the person that he is and the guy that he is, and I’m so excited to learn from him and help serve him in any way.”

Without naming any specific teams, Winston said he did have other opportunities that might have paid him more money or given him a better chance to start. His deal with the Saints is worth $1.1 million, with another $3.4 million in available incentives, a source told ESPN’s Field Yates.

Winston said he took this opportunity to work with Brees, coach Sean Payton and others “in a heartbeat.”

“When you have an opportunity to work with a coach who is as successful and as smart as Sean Payton and work with a quarterback who will be, whenever he decides to retire, he’s probably getting escorted to the Hall of Fame, I don’t think you really can beat that. Especially if you believe in yourself,” Winston said. “If you believe in the ability that you have, really if you have faith that you will become a starting quarterback again, you take this opportunity in a heartbeat, to work with this amazing group of men.

“Being a quarterback, you have to be a student of the game. So now I actually get a chance to dive into that more, and I actually have a Hall of Fame quarterback that I’m learning from, as opposed to trying to learn by myself or use Google.”

Asked whether he thinks that future starting opportunity could come with the Saints after the 41-year-old Brees retires, Winston said he is not looking that far ahead.

“I’m focused on this primary opportunity,” Winston said. “The primary opportunity is getting a chance to work with Drew Brees, Sean Payton, Taysom Hill and Tommy Stevens, and [quarterbacks coach Joe] Lombardi and [offensive coordinator Pete] Carmichael and [offensive assistant D.J.] Williams. … And we’ll be able to have that conversation next year or years down the road. Who knows? We don’t know. I didn’t think I was gonna be in this position this time last year, but God had a different plan, and I’m excited for the plan he has for me moving forward.”

Winston talked Tuesday on an Instagram Live video with fellow former Florida State quarterback Charlie Ward about how he wanted to put his ego and the money to the side. And he referenced a proverb that suggests “humility comes before honor.”

On Wednesday, Winston referenced the recent Disney animated movie “Onward,” which he said he watched with his 1-year-old son.

“That’s just an amazing word. And that’s what I’m doing. I’m pressing onward,” said Winston, who has acknowledged the improvements he needs to make in his game.

Although Winston led the NFL with 5,109 passing yards last season, he also became the first quarterback in league history to throw at least 30 touchdown passes and 30 interceptions. That led the Tampa Bay Buccaneers to sign Tom Brady as a replacement.

Winston already has taken steps to improve physically this offseason. He had LASIK surgery in February, which he said has removed the blurriness from far-away objects like street signs and license plates. He downplayed the significance of the knee scope that he had after the season — pointing to his Instagram workout videos as evidence. But he did say that after that surgery in Birmingham, he began working with physical therapist Kevin Wilk, one of Brees’ longtime mentors. Wilk and Dr. Jeffrey Dugas, who performed the surgery, encouraged Winston to get healthier through a vegan diet.

“So I’ve been vegan for the past four months, and it’s just changed my body drastically,” Winston said — though he admitted, “I do cheat every Saturday.”

Winston got married last month to his longtime girlfriend, Breion Allen, whose extended family is from the New Orleans area.